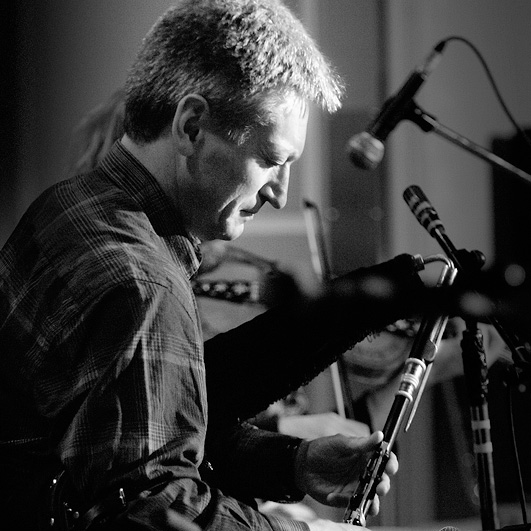 Piper Mick O’Brien was born in Dublin in 1961. He began his musical education on the uilleann pipes at the city’s famous Thomas Street Pipers Club. The O’Briens are a musical family; Mick’s father and four brothers played and Mick recorded his first album with them when he was just 13 years old. He later joined Na Piobairí Uilleann, an organisation founded to promote piping, where he refined his playing still further. His highly acclaimed solo CD, May Morning Dew, was released in 1996 and in 2003, he released Kitty Lie Over with fiddler Caoimhin Ó Raghallaigh. It was named best traditional album of the year by New York’s Irish Echo. The duo’s second album was released in 2011.

He has broadcast and recorded extensively. His playing can be heard on numerous recordings with artists such as The Dubliners, Frankie Gavin, Charlie Lennon, Charlotte Church, Boys of the Lough, Altan and the RTÉ Concert Orchestra. For the past five years, he has performed and travelled with Norwegian group Secret Garden and has played on their last two albums, Dawn of a New Century and Once in a Red Moon.

He is much in demand as a teacher and has toured extensively and given master classes throughout Europe and North America. He lives in Dublin with his wife and three children and holds down a full-time job as a teacher at St Davids School in Artane, where he teaches geography and Irish and looks after the school’s hurlers. 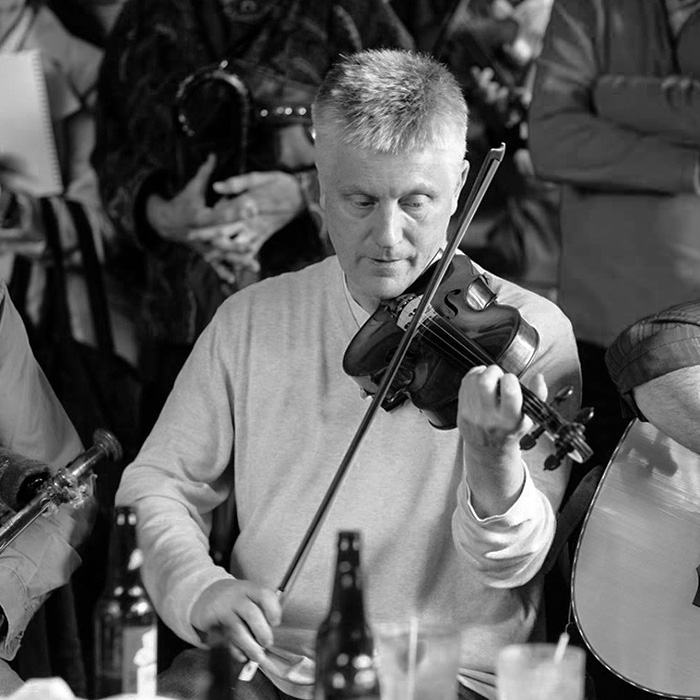 Andrew grew up in Dublin, Ireland. His father Dinny played the accordion. Dinny was from north county Dublin, and in the ’50s and ’60s learned his music from box players, Sonny Brogan and Bill Harte. In the ’70s and ’80s, the O’Brien family was recognized as one of the driving forces in the resurgence of traditional music at a grassroots level in Dublin. Denis (Donncha ), whistle; Mick, pipes; Tom, fiddle; John, pipes; and Andrew fiddle.

Andrew moved to St. Louis, Missouri in 1990. He is an attorney at O’Brien law firm, a firm he founded in 2000. He played regularly at John D. McGurk’s with Michael “Piper “ Cooney and Terry Corcoran who were living in St Louis in the 1990s and early 2000s. Andrew is active in the St Louis traditional music scene, to include SLIA ( St Louis Irish Arts), and the St. Louis Tionol which celebrated its 22nd anniversary in 2019.

Andrew learned most in regards playing fiddle from a Christian Brother, Brother Jim Forrestal, a teacher based at their local School, St. David’s CBS, Artane. Brother Jim was a regular visitor to their home on Chanel Road on Tuesday nights and when there was quiet time would teach a few slow airs. Andrew was a regular at sessions around Dublin in the 1980s in the company of his brother Denis on the whistle, and Andrew’s style has been shaped by that experience playing in unison with the whistle 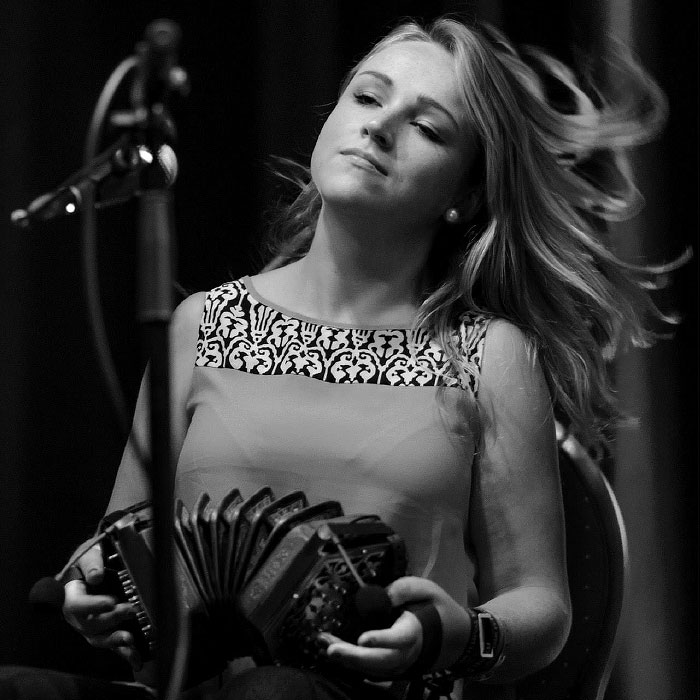 Caroline was, from a young age, exposed to the richness of Limerick, west Limerick and Sliabh Luachra traditional music, an influence which has become the cornerstone of her uniquely vibrant, passionate and emotive style of concertina playing. Now having toured extensively throughout Europe, Canada, America, Australia and New Zealand performing at festivals such in both solo and ensemble capacities, Caroline is truly a world musician.

Caroline has been playing the concertina for more than twenty years and professionally since 2007. She achieved first class honours while studying Irish traditional music at the Irish World Academy of Music and Dance at the University of Limerick. She has most recently graduated from the university’s Master of Arts in Traditional Irish Music Performance, where she again achieved the coveted first class honours. Caroline is a prolific composer of contemporary Irish repertoire inspired by her interaction with traditional music on a local and national level, since studying composition within her BA degree.

In addition to her TTCT diploma in Irish traditional music teaching, Caroline also completed a Professional Diploma in Music Education in 2012. Her versed approach to tutelage is not only a testament to her musical expertise, but demonstrates the patience and empathy of experience. She is a regular performer and tutor at Irish, roots and folk music festivals all over the world, and teaches and performs regularly around the South West of Ireland.

Since 2013, Caroline has been a member of the group FourWinds, performing “An exciting landscape of tunes and lyrics that present Irish traditional music in a modern and creative context”. Caroline has just released a duet recording of traditional Irish music with uilleann piper Tom Delany entitled ‘Never Say Goodbye, Say Good Luck’ which has received rave reviews and international critical acclaim since its release. While on home soil, Caroline currently lives in Dingle, Co. Kerry, where she performs regularly. She is also in the process of completing her solo album. 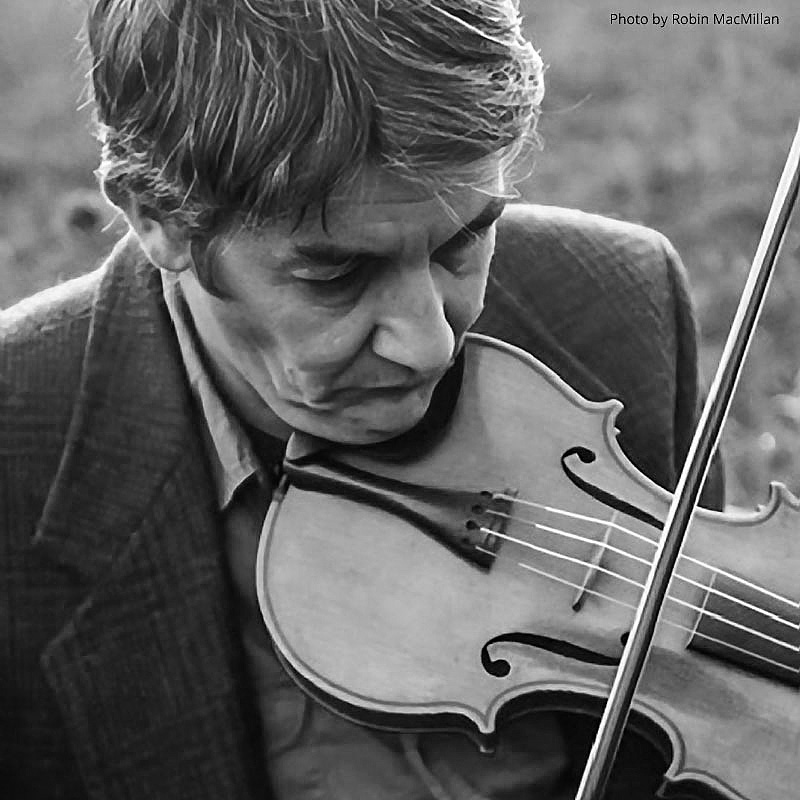 Fiddle Player Patrick Ourceau, based in Toronto and for many years resident of New York City, has for over twenty years been performing and teaching Irish Music all over North America and Europe. He has released and been featured on a host recordings, most notably on Tracin’ with concertina player Gearoid O hAllmhurain; Live at Mona’s with Guitarist Eamon O’Leary; on the Chulrua release The Singing Kettle; on flute player Cathal McConnell’s Long Expectant Comes at Last; on accordion player John Whelan’s Celtic Roots; and on theTG4 CD and DVD release Geantrai, a compilation celebrating the first ten years of the popular traditional Irish music television program.

Patrick has been very active in the promotion of Irish music in Toronto, mainly through his private teaching but also through workshops, sessions and various performances. He taught for several years in the Irish music after school program at St. Paul school in Regent Park and for the last few years, has been helping with other local musicians to organize the Chris Langan Weekend. 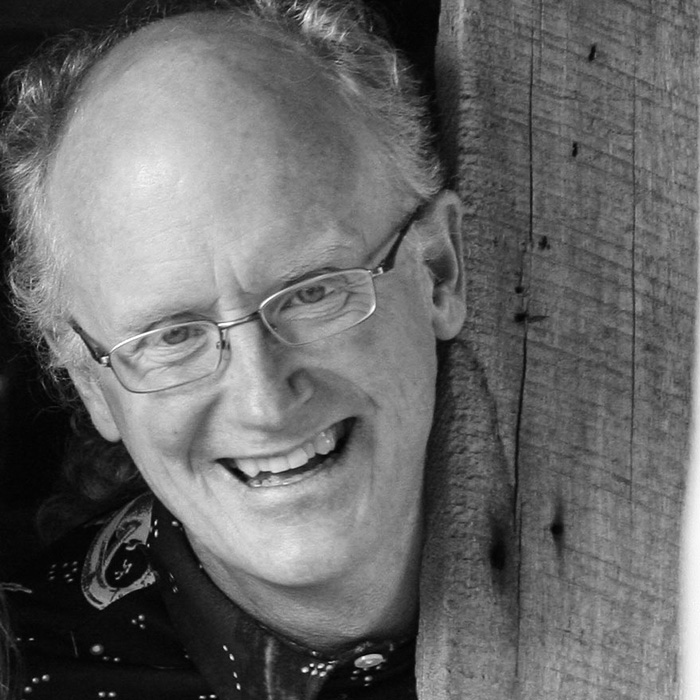 Pat O’Gorman (pipes, whistle, flute) began playing the bagpipes in the Ontario Highland Piping world in the ’60s and played under Chris Langan in 1971 in the Glenmor Pipe Band in Toronto, the beginning of a 20-year friendship…Chris taught Pat his first Irish tunes on the Highland Pipes. Pat continued to expand his knowledge of Irish music with local masters, Ena O’Brien, Kevin Finnegan, and Jimmy Noonan, and as well during a 2-month long, Canada Council-supported period with Peter Horan in Ireland in 1993. Over the years he has performed pipes, flute and whistle professionally with Na Cabarfeidh, Rare Air, Morgaine Le Fay, Windbags, and most recently with The Brian Pickell Band, as well as for numerous television, radio and movie soundtracks. He performs regularly with his family band “The O’Schraves” (the O’Gorman/Schryer/Lefebvre Family), which was awarded best new emerging group by Live Ireland and best new group by the Chicago Irish Times for their 2014 release “Family Day”. Pat has been involved with the Chris Langan Weekend since the beginning, both as an instructor and committee member. He has lived in the Algoma region for 15 years and is a founder and artistic director, with Julie Schryer, of AlgomaTrad: The Algoma Traditional Music and Dance organization. 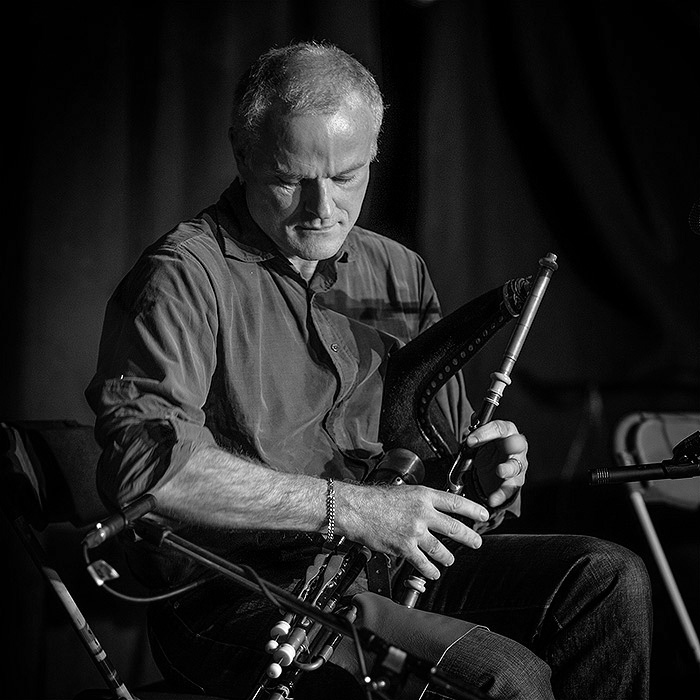 Brian Kavanagh was born in Dublin and started to learn the pipes when he was thirteen, in the Pipers’ Club, Thomas Street, where he was taught by Terry Mohan and then by Gay McKeon. He has lived in Toronto for almost 30 years and regularly plays in sessions in the city. He plays a set of C-natural pipes made by David Quinn and Benedict Kohler. Among many excellent pipers, Brian admires greatly the piping of Tommy Reck, Liam O’Flynn and Gay McKeon. 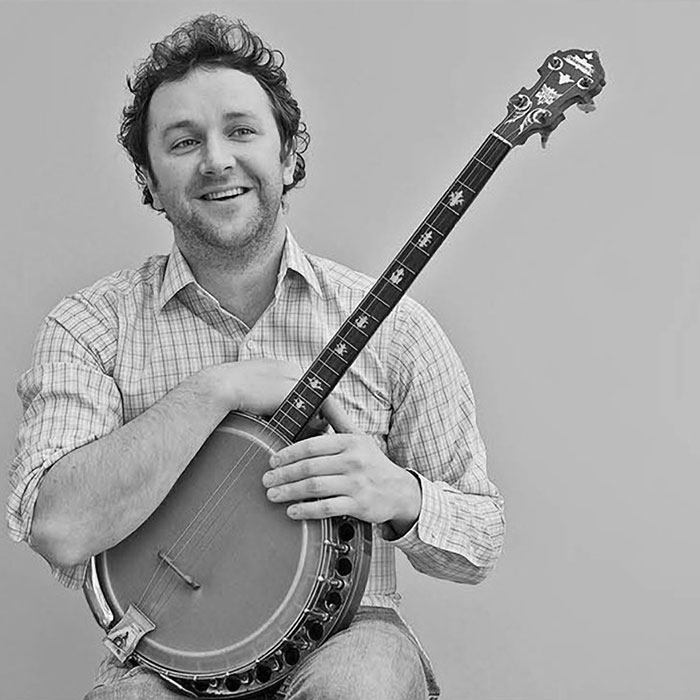 Shane Mulchrone is from near Ballina, Co. Mayo and has been playing the banjo for over 20 years. His early tutors included John Carty and Tommy Finn, and his music is additionally influenced by the local musicians of Mayo and Sligo. He has taught at numerous summer schools and workshops around the country and abroad, including the Joe Mooney Summer School, Scoil Acla and Scoil Éigse at Fleadh Cheoil na hÉireann. He has featured on television and radio and performed internationally in Europe, America, and most recently Cuba. Shane plays regularly at sessions and festivals around the country. 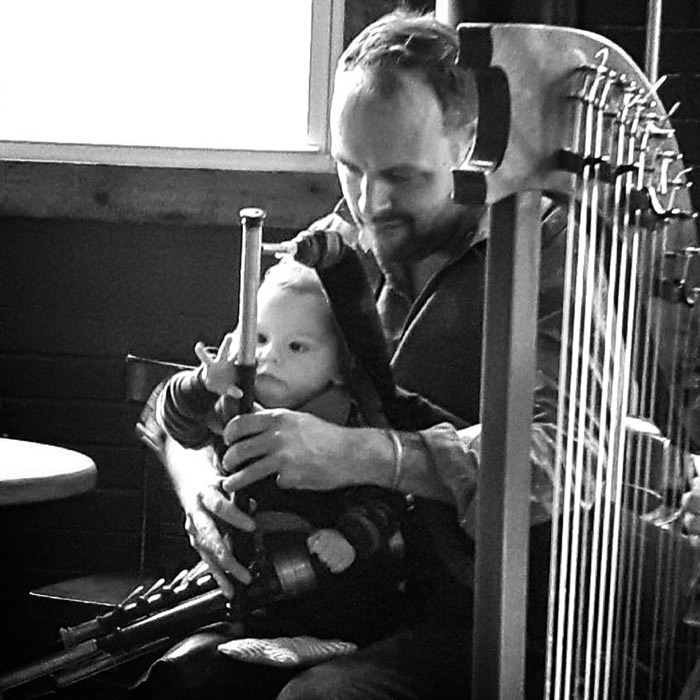 Olivier Craig-Dupont is piper from Montreal, Quebec, Canada. In these wildly changing climes, he destroyed, in about a week, the first reed his pipe-maker had sent him. After a few key lessons from Benedict Koehler, some highly valuable chats with Geoff Wooff and a basketful of failed attempts, Olivier developed some tricks that he will share with you to get you started. He makes no hard measurements for his reeds; He uses the asymmetric cut to stabilize apertures, and cooks his drone-reed cane in the oven! He aims for an “old” sound: chiffy, not too loud and easy to blow. So bring your tools and let’s try to make a reed!
Follow us: